"Direct Primary Care" doctors offer a new kind of care, changing how we think about healthcare

Bryan Hill spent his career working as a pediatrician, teaching at a university, and working at a hospital. But in March 2016 he decided he no longer wanted a boss.

Soon after, Hill learned about a different way to run a doctor's office.

Now almost 18 months into his practice, he said, "I couldn't imagine practicing any way else."

Hill's practice is something known as direct primary care. Instead of accepting insurance for routine visits and drugs, these practices charge a monthly membership fee that covers most of what the average patient needs, including visits and drugs at much lower prices.

Hill is part of a small but fast-growing movement of pediatricians, family-medicine physicians, and internists opting for this different model. It's happening at a time when high-deductible health plans are on the rise. A survey in September 2016 found 51% of workers had a plan that required them to pay up to $1,000 out of pocket for healthcare until insurance picks up most of the rest.

That means consumers have a clearer picture of how much they're spending on healthcare just as they're having to pay more. At the same time, primary-care doctors in the traditional system are feeling the pressure under the typical fee-for-service model in which doctors are pressured to see more patients.

The direct primary-care movement — in which practices are set up on a doctor-by-doctor basis — has been slowly but steadily growing over the past few years, adding about 170 practices in the past year despite some larger practices shutting down.

Direct primary care has the potential to simplify basic doctor visits, giving doctors time to focus just on the patient and care for them in ways they might not have had time for otherwise.

But there are also concerns from insurers about what separating insurance from primary care will mean for people who still ultimately need insurance.

Members of direct primary-care practices pay a monthly fee, which, depending on the practice, your age, and the number of family members you have on the plan, can run from $50 to $150.

Included in that monthly fee are basic checkups, same-day or next-day appointments, and — a boon to patients — the ability to obtain medications and lab tests at or near wholesale prices.

Direct primary care also comes with near-constant access to a doctor — talking via FaceTime while the family is on vacation, or taking an emergency trip to the office to get stitches after a bad fall on a Saturday night. Because direct primary care doesn't take insurance, there are no copays and no costs beyond the monthly fee.

Doctors can also take the time to keep in touch with patients in between visits to see how they're doing. 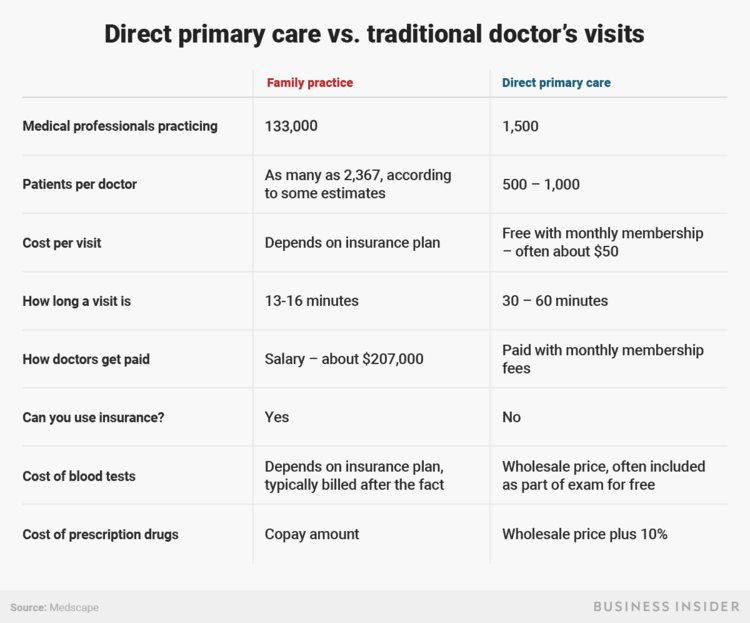 Paul Thomas, whose practice in Detroit has grown from 50 members to 250 in the past year, will text his patients once a week working on long-term goals like losing weight, eating better, or quitting smoking. He'll check in with the patient, initiating a conversation and keeping the goal in their mind in a way that an infrequent visit to the doctor's office might not.

The number of people in a particular practice who have insurance varies, according to the 17 direct primary-care practices Business Insider spoke to. At some practices, all but a handful had some form of insurance, while at others a little more than half didn't have insurance.

To describe how coverage functions under direct primary care, doctors use the example of car insurance. You don't use your car insurance for small transactions like oil changes, but it's there for you if you get in a car accident. Likewise, health-insurance plans — especially those with high deductibles — can be there if you require healthcare beyond just a standard checkup.

While the number of direct primary-care practices is growing, it's not exploding in the same way a national chain might be able to. For the most part, doctors build their own practice, which keeps it local. Philip Eskew has been tracking the movement's growth through his website, Direct Primary Care Frontier. By his count, there are about 790 practices in the US as of March. That's up from 620 practices in April 2017 and just 125 practices less than four years ago, in June 2014.

The movement is still relatively new. Eskew said direct primary care began at the end of the 1990s and early 2000s, when three doctors had the idea to go insurance-free, charging monthly fees instead and freeing up time to enjoy practicing medicine. This way, patients who might not have insurance could have a clear idea of how much going to the doctor would cost.

One of the first practices to make it big was Qliance, a direct primary-care system based in Washington state that got its start in 2007. The company was backed by Amazon CEO Jeff Bezos and Dell founder Michael Dell before the company leadership bought it to run it privately. As of 2017, Qliance has 25,000 members visiting a handful of clinics around Puget Sound, but in May 2017, Qliance announced it was closing.

Cofounder Erika Bliss, who now runs a practice called Equinox Primary Care, said the abrupt ending came after a few strokes of bad news. First, two major employers using Qliance decided not to renew their contracts. In trying to get a small-business loan, Qliance got involved with what turned out to be a fraudulent lender.

"We are now officially victims of a crime, according to the FBI," Bliss said. "It makes you feel like, OK, we're not crazy. It was actually a really bad thing that happened and it happened to a whole bunch of different businesses, but you never expect that's going to be you."

After that, it was difficult to get the loan Qliance needed to stay afloat.

Others that got their start at the beginning of the movement, including Iora Health, are still growing. Iora now has 24 practices in eight states, with plans to open 12 more in the coming year.

Along the way, Iora's evolved the model in which it practices, according to CEO Rushika Fernandopulle. For one, instead of having patients pay the monthly fee directly, Iora works with "sponsors" — employers or Medicare Advantage insurance plans like Humana — that cover the monthly fee, should a member or employee decide they'd like to use direct primary care. Iora also built out care teams of nurses and other health professionals that can help the doctors within the practice. 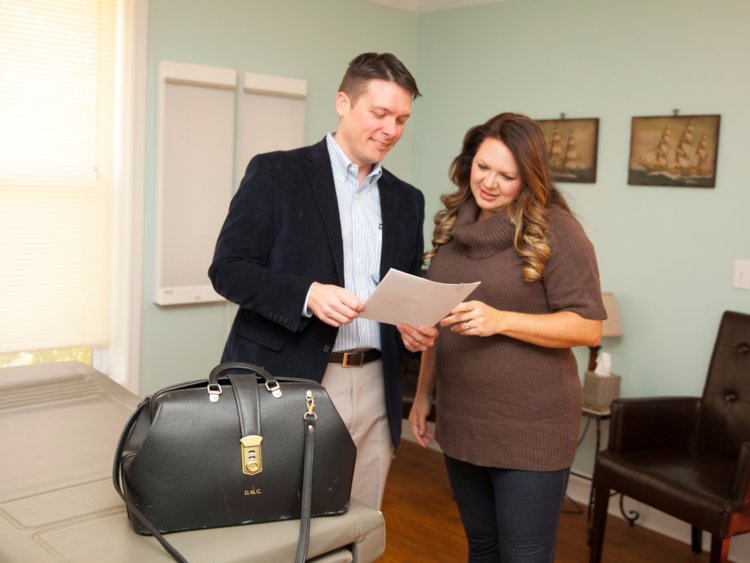 As the movement grows, the healthcare industry has begun to push back against certain aspects of the model.

Insurers, for instance, have concerns about the model. For one, because insurance covers primary care, they're worried about members in their plan essentially being double-billed. Because the practices are run without any connection to insurance, insurers are also concerned practices could get too overloaded and neglect patients.

"Patients are trusting the providers in these agreements with not only their money but also their health," America's Health Insurance Plans spokeswoman Cathryn Donaldson said. "Overall, direct primary-care arrangements significantly harm patients by increasing costs and distorting risk pools."

All the providers Business Insider spoke with said they recommended patients have some form of insurance, and there were many instances where most patients in a practice had insurance or took part in a healthcare sharing plan, a program that functions like insurance in which an amount is sent monthly to people who have medical expenses in the plan.

To date, 23 states have enacted laws that define direct primary-care practices as not insurance, a distinction that keeps them from being regulated like an insurance company. More legislation is in the works, including in Nebraska that would give state employees the option to use direct primary care.

But the pressure from insurers isn't felt by everyone. Josh Umbehr, who runs Atlas MD, which provides electronic health-records software for direct primary-care practices and also runs a practice under the same name, told Business Insider he mainly sees pushback on the legislative side, but he's had success working with insurers and the employers they work with.

"The insurance lobbyists tend to fight it at the legislative level because they're worried about what precedent it'll set," Umbehr said. "But we're finding it easier to work with insurance companies and their employers, because on a more rubber-meets-the-road level, they're finding they're saving money by decreasing that administrative burden."

There's also the worry that because doctors at direct primary-care practices take on fewer patients than doctors at traditional primary-care practices, it might add to the caseloads of primary-care doctors. There is a shortage of these doctors in the US, partly because many choose to go into specialty medicine. Some doctors, on the other hand, say that they would have considered leaving medicine outright if they hadn't had the option to do direct primary care.

Medical organizations have had mixed reactions to the movement. The American Academy of Family Physicians supports it, while the American College of Physicians, which represents internal-medicine doctors, has chosen not to take a stance on direct primary care.

On a national level, there are still some challenges to direct primary care. For example, Eskew said in the eyes of the Internal Revenue Service, having a health savings account (HSA) is illegal if you're a member of a direct primary-care practice. The IRS views the monthly fees as insurance payments, making the person ineligible for an HSA, he said. Patients also can't use the funds from an HSA, flexible savings account, or Medicare savings account to pay their monthly membership bills.

A bill that would change that HSA process has made its way to Capital Hill, and had the possibility of being introduced by lawmakers as part of this summer's healthcare overhaul. Butbecause no legislation passed after a dramatic "no" vote, the process hasn't changed.

The future of the movement

It's going to take getting past "stupid regulatory barriers" like the health-savings-account IRS issue, along with getting big employers and more health plans on board, for direct primary care to grow even faster than it already is, Fernandopulle said.

Even with the challenges that ultimately spelled the end for Qliance, Bliss still gets excited about the promise of the direct primary-care movement on a doctor-by-doctor level. She said almost half of the doctors who were practicing within Qliance have struck up their own practices around Washington.

"I feel like we're a big tree that fell over and that we're kind of turning into a nurse log where lots and lots of stuff is sprouting up," Bliss said. "Practices are popping up everywhere. We're sort of losing count at this point."

And that interest has spread to medical students and residents. Lauren Clark, who runs Black Bag Family Healthcare in Johnson City, Tennessee, with her husband, Dustin, said that the practice is booked up with visiting residents going through two- to four-week rotations all the way through August.

When Fernandopulle spoke at the AAFP in 2017, he could feel that interest growing as well. "There were 5,000 young docs who were just so eager to hear about this," he said. "This is so much of a better vision of what the job is."